Martial arts have been around for centuries, yet they continue to evolve and develop. With the rising popularity of MMA, now more than ever people are getting interested in different martial arts, the old and the newer.

What are Martial Arts? 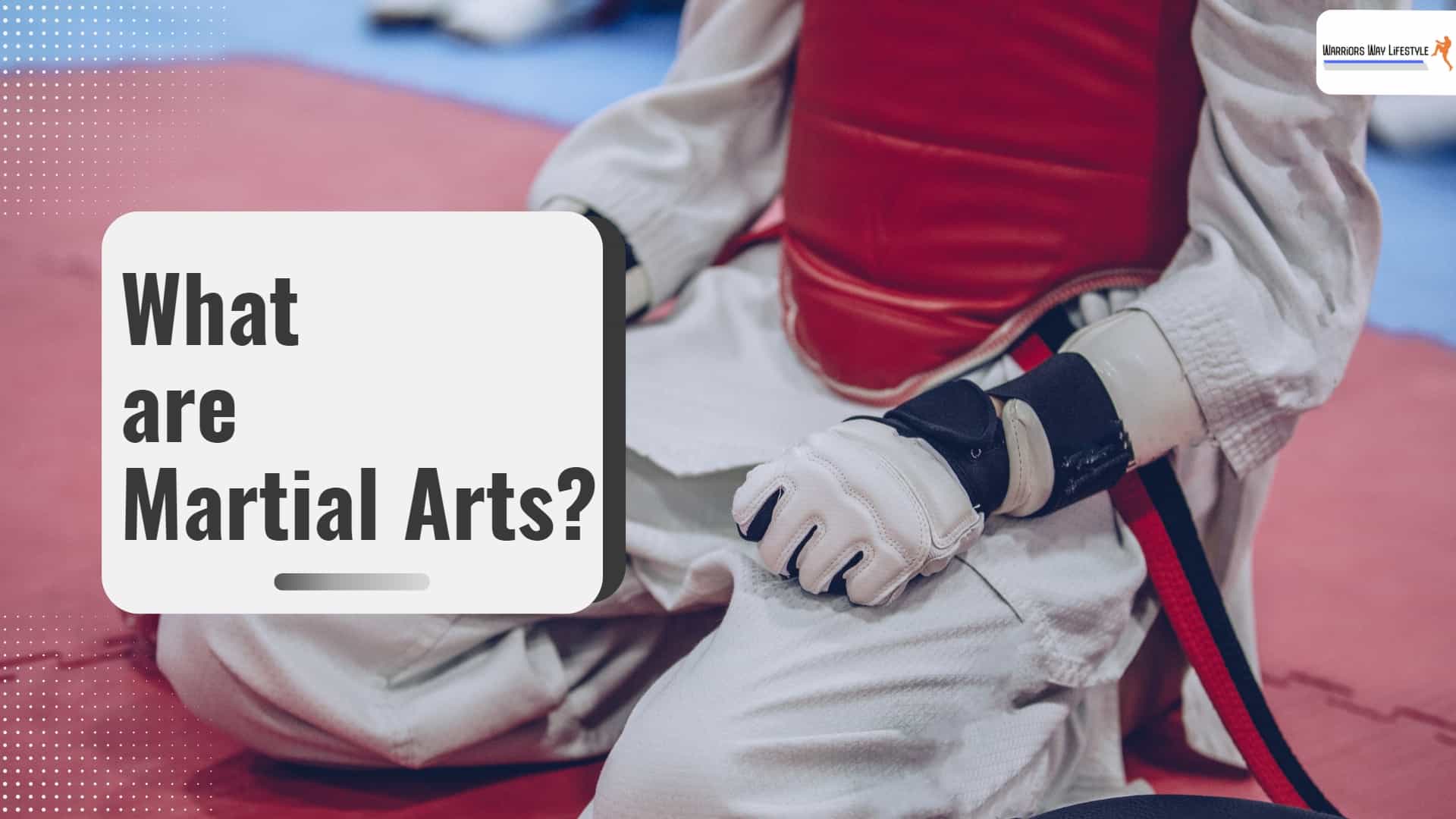 Martial Arts is the practice of using one’s physical, mental or spiritual skills for the purposes of self-defense or other real-world purposes. The discipline can be traced back to the earliest human history, as it has existed in various forms in all cultures and civilizations.

From Kalaripayattu to BJJ and Krav Maga, martial arts have evolved along with the evolution of civilization. Martial arts can be practiced by anyone and anywhere, and are one of the best to protect yourself.

While the ideal situation is to always avoid physical confrontation, when it’s not avoidable, it’s good to be prepared by knowing martial arts. But, we seriously urge you to avoid a fight whenever you can, because in a street fight, there are no rules, and anything can happen.

Again, if the fight is not avoidable by any means, here are 7 martial arts that can teach you self-defense techniques that will help you protect yourself. 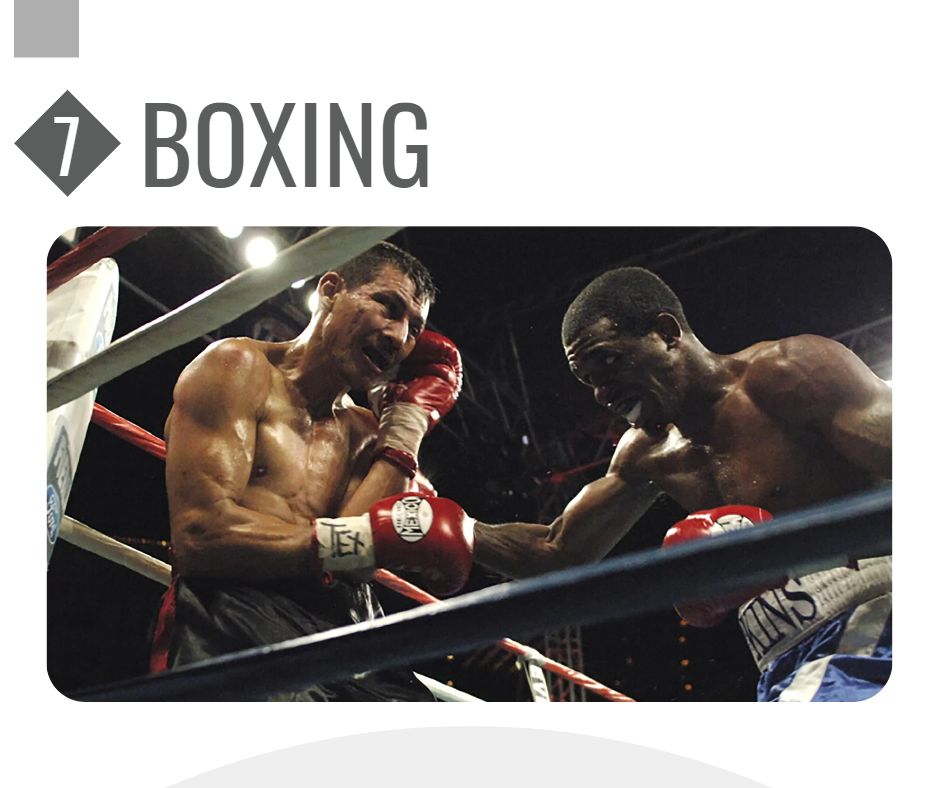 Boxing is one of the oldest martial arts, dating back to the time of the ancient Greeks. The most popular combat sport in the world, and, the absolute best martial art if you want to learn to punch.

If you want to become a professional boxer, well, that takes a lot of time but learning the fundamentals actually doesn’t, and that is one of the reasons why boxing is on this list.

Knowing how to throw a proper punch, and equality as important, as to how to avoid one, can make a world of difference in a street fight. It’s also one of the most important martial arts to master before entering an octagon, and you see a lot of professional MMA fighters that base their game around boxing.

While it’s great for punching, boxing lacks in other aspects of hand-to-hand combat. As it focuses solely on punching, “sweet science” doesn’t deal with grappling, leg kicks, chokeholds, and so on.

But, boxing is great for other aspects of life. Learning to box will give you more courage in life, make you feel more confident and capable, and has a ton of benefits health-wise.

The most important health benefits that boxing brings include improved cardiovascular fitness, improved stability, and improved strength. As strength is important for self-defense, very few martial arts will develop upper body strength as well as boxing. 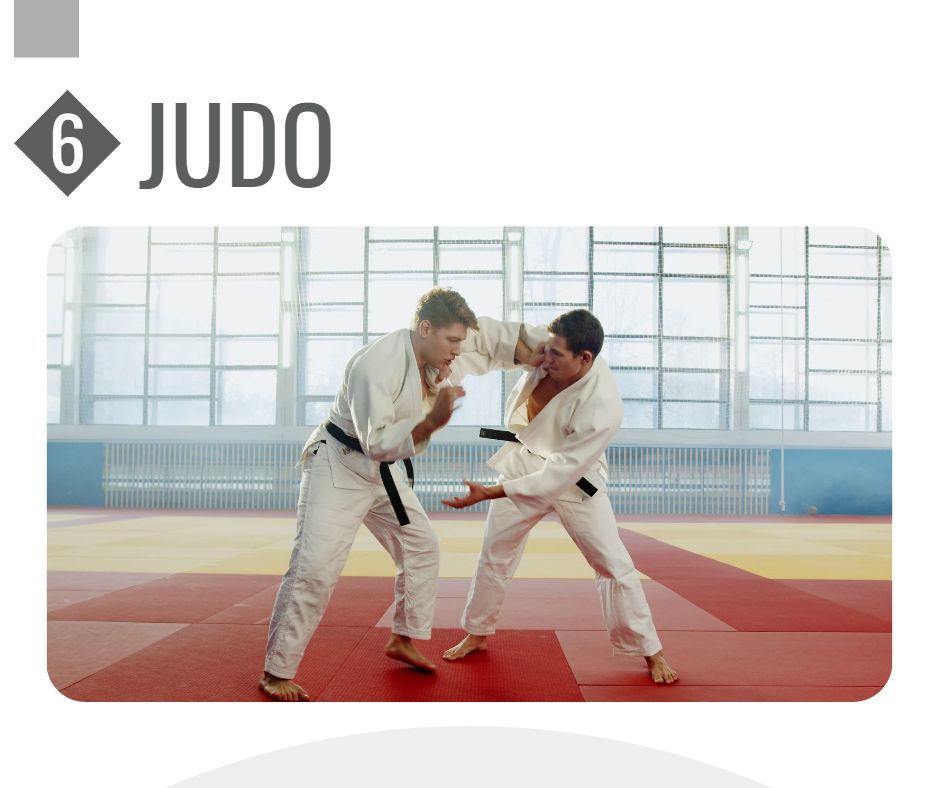 While boxing focuses solely on striking, Judo follows a completely different philosophy. A Martial Art invented in 1882 by Jigoro Kano, judo grew and grew, and is now an Olympic sport, practiced by millions around the world.

Judo focuses on throwing opponents on the ground and controlling them with various techniques. The meaning of judo is “gentle way”, which is what judo is all about.

Focusing on effectiveness rather than on brute force, Kano, being a smaller man, wanted to sophisticate jiu-jitsu into a martial art that will help physically smaller people defend themselves, and that’s how judo came to be.

While it’s best combined with some striking martial art, like boxing, for maximum efficiency in a street fight, judo, as a stand-alone combat sport can be a great martial art for self-defense if you are very good at it.

And, becoming great at judo takes time. To develop the throwing techniques, the ground game, timing, and hand-eye coordination needs a lot of practice. Practice makes perfect, and judo is no exception.

Sambo was created in the Soviet Union in the 1920s, and it was developed to be used in the Red Army to help soldiers in hand-to-hand combat. Mixing striking with grappling, combat sambo is not only a good self-defense martial art, but it’s also good for developing strength.

Combat Sambo is used by fighters like Khabib Nurmagomedov and Fedor Emelianenko, two great MMA champions. If you’ve watched Khabib fight, you can see how well he uses sambo to get the opponent to the ground and control him.

Sambo makes you stronger, more confident, and better able to defend yourself. However, it’s challenging and it takes a lot of time, patience, practice, and experience to get the hang of it. This is best done through competition which will get you much closer to the fight experience than just regular sparring. 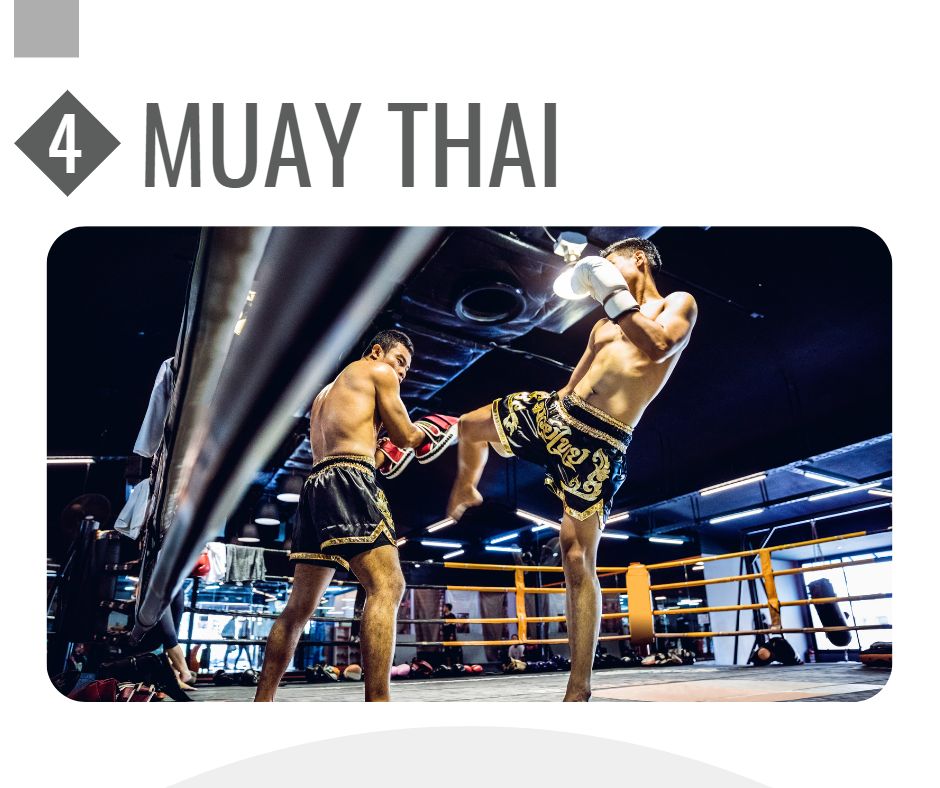 “Art of eight limbs”, as it’s also known, is suiting for Muay Thai, as this combat sport focuses on eight body parts for striking. It’s a full-contact combat sport that uses kicks, punches, clinch, elbows, knees, throws, and sweeps to beat the opponent.

As it’s one of the most “productive” striking martial arts, there are many MMA fighters that utilize Muay Thai as a part of their game. These include Jon Jones, Donald Cerrone, Valentina Shevchenko, Edson Barboza, Jose Aldo, and many others.

While Muay Thai has excellent attacking techniques, it also has defense techniques: parring, evading, anticipation, blocking, disruption, and avoidance, which may help you in a street fight. As a result, Muay Thai is a great martial art for self-defense, but it is very hard to master. 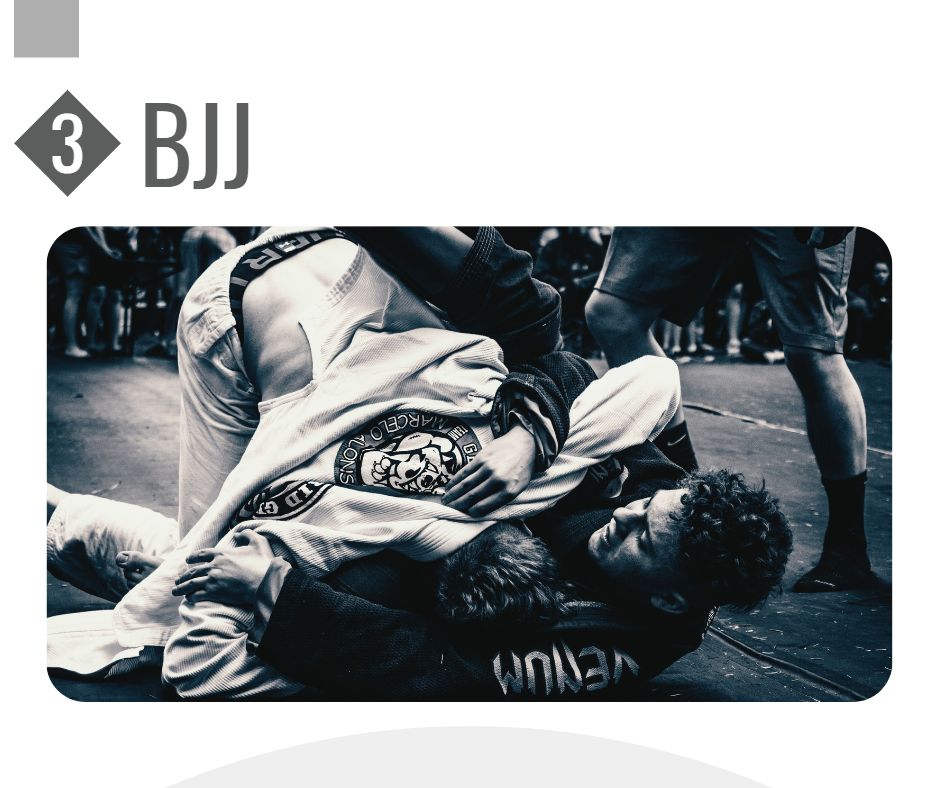 BJJ, or “Brazilian Jiu-Jitsu”, is a martial art that was developed in the early 20th century by the Gracie family in Brazil. BJJ is based on taking the opponent down and using submission techniques, which include chokes, leg locks, arm locks, and more to defeat the opponent.

Keep in mind that these are just categories of techniques that BJJ uses, as there are many sub-groups and thousands of individual techniques. The history of BJJ is a story of the development of the art of submission fighting, and the evolution of techniques, methods, and principles that make it such an effective self-defense system.

But exactly how effective? Well, BJJ doesn’t deal with striking, and if you look at it as a self-defense martial art, that is its biggest flaw. But if you do have some striking background (giving a punch, avoiding a punch), mixing that with BJJ will be more effective in the street fight. However, if you are in a fight with someone who knows how to handle himself on the ground better than you, then the best option is to avoid a fight.

It’s a pleasure to train in BJJ. It will make you feel more confident in yourself, you will develop strength and be much more successful in life. It’s no wonder that it’s become one of the most popular martial arts in the world, with competitions taking place almost anywhere on the globe, and the number of practitioners just continues to grow (celebrities train BJJ also!). 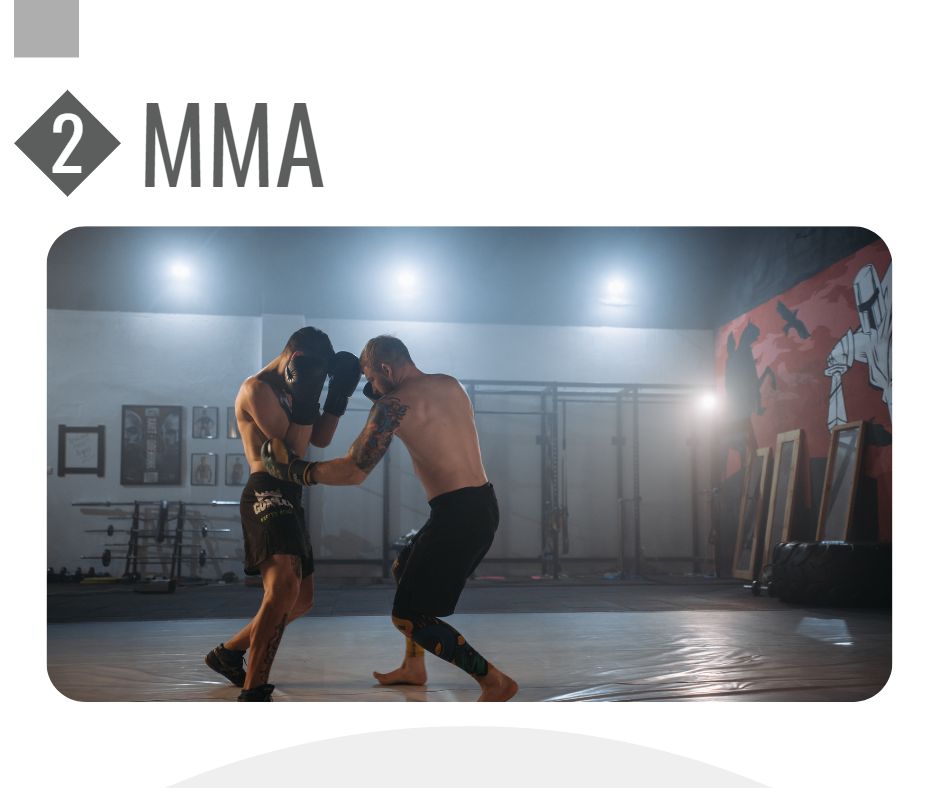 MMA, or Mixed Martial Arts, has in recent times become a global phenomenon. With the astronomical rise of the sports top promotions, especially the UFC, people around the world are getting familiar with the sport and beginning to train it.

As its name suggests, MMA is a mixture of many different martial arts, primarily wrestling, BJJ, boxing, kickboxing, Muay Thai, judo, sambo, and more. That is the biggest strong point of MMA; combining all those martial arts into one, training each one, and becoming good in all aspects of fighting.

On the other hand, you can’t possibly reach the pinnacle in all of those martial arts that we’ve mentioned. But, MMA will teach you the stand-up game, and what to do if the fight goes to the ground, and that is something that is very important in a street fight. 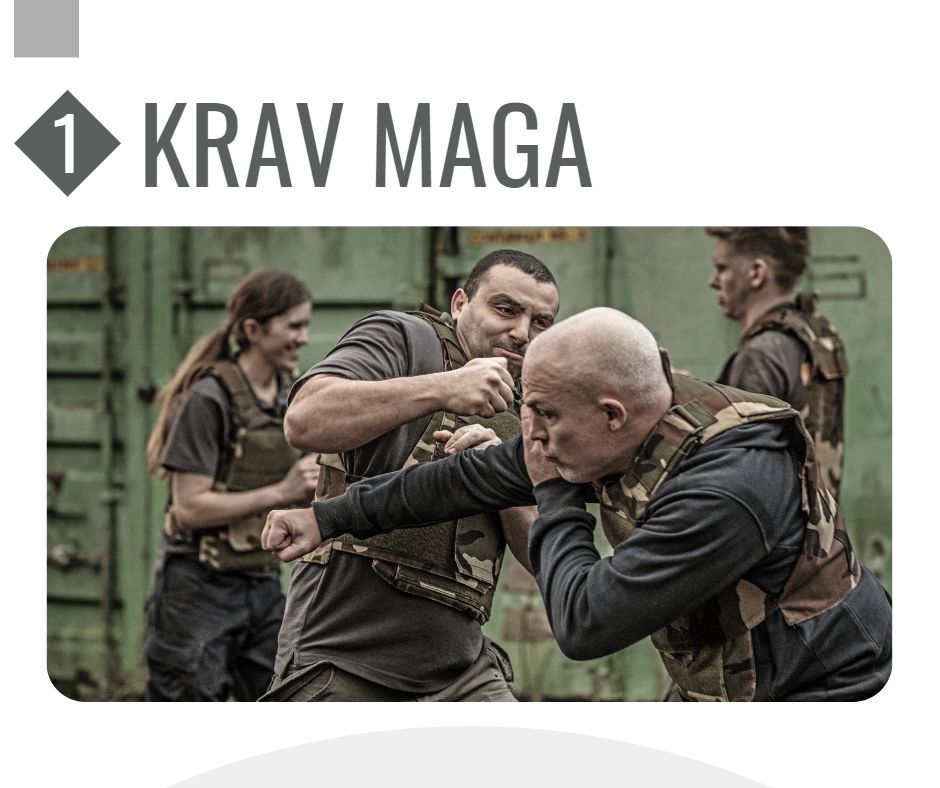 Krav Maga rightfully takes our number one spot. It’s more of a self-defense system than a martial art, developed by Imi Lichtenfeld in the late 1930s. Krav Maga was developed for the Israeli Special Forces and is used around the world to teach people how to deescalate a fight, and what to do if the fight is inevitable.

Krav Maga, as it’s designed for effectiveness in a street fight, uses many techniques that will teach you how to take the fight to the ground, escape from a choke, disarm, and also how to defend. As we said, in a street fight there are no rules, and Krav Maga is a hand-to-hand combat system that resembles that more closely than any other martial art.

Practicing Krav Maga will make your reactions quicker, and better comprehension of your surroundings. In training, you will encounter rubber weapons used to more closely represent possible threatening real-life situations.

Krav Maga is an intense system, and may not be for everyone. Using techniques from various martial arts, Krav Maga gives great results. After months of training, you will feel more confident in your skills, but, the most important thing that you can learn from Krav Maga instructors is to always escape from possible conflict.