7 MMA Athletes Who Won Olympic Medals (Some are Still Active!)

7 MMA Athletes Who Won Olympic Medals (Some are Still Active!)

Mixed Martial Arts (MMA) is a sport that combines several styles of martial arts including kickboxing, boxing, wrestling, judo, karate, jujitsu, etc. Since its creation in 1993, the sport has evolved into a very complex combat sport.

In the early 2000s, MMA was popularized by the Ultimate Fighting Championship (UFC) and several other MMA promotions like Bellator. Today, UFC still remains the largest MMA organization in the world.

But what really makes MMA great is the athletes who compete in the sport. While some athletes have only made it to the UFC or Bellator and fallen short of their goals, others have won medals in the Olympics and titles in their promotions.

Here are the seven Olympic medalists that competed in MMA and had storied careers. 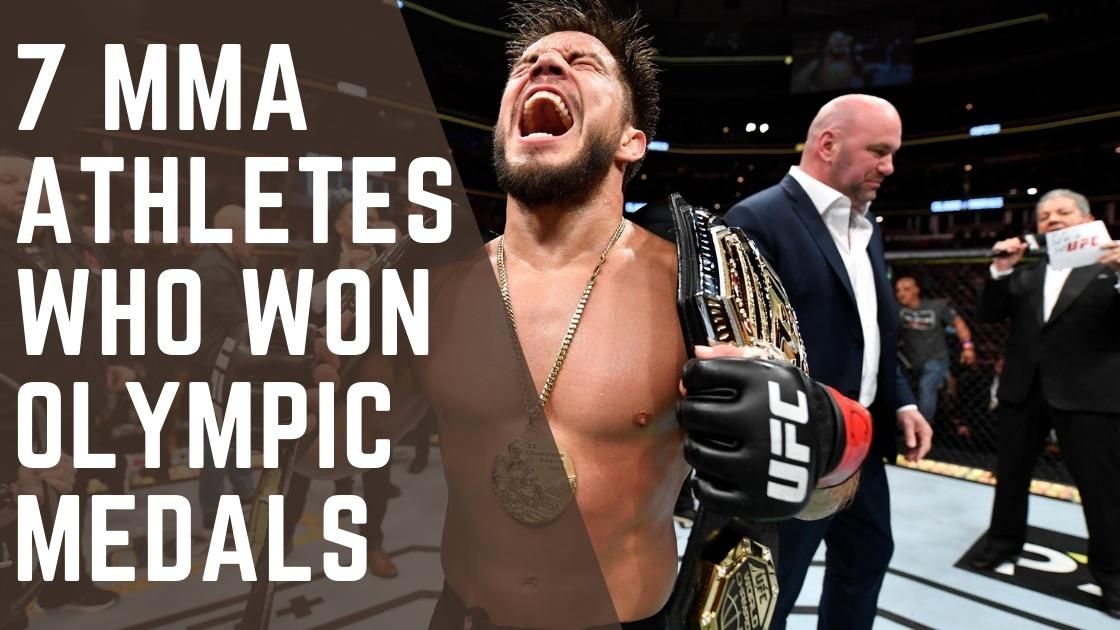 “Triple C”, as he is known to MMA fans, Henry Cejudo gave himself that nickname because he won two UFC belts and has an Olympic gold medal. He won the gold medal in freestyle wrestling at the 2008 Beijing Olympics, where he defeated Tomohiro Matsunaga in the final, winning the medal at just 21 years of age.

Cejudo is the only fighter in the history of the UFC to hold both the Flyweight and Bantamweight titles simultaneously. He retired from MMA in 2020, with a record of 16 (8 KOs) – 2.

Arguably the most popular female MMA fighter of all time, and certainly one of the greatest, Ronda Rousey won the bronze medal in judo in the 2008 Beijing Olympics. Rousey transitioned to MMA and became the first champion in the UFC Woman’s Bantamweight Division.

She reigned as the queen of the division (6 title defenses) until her loss to Holly Holm at UFC 193 in 2015. After that loss, Rousey attempted a comeback at UFC 207 against Amanda Nunes but fell short. Rousey now has a professional wrestling career in WWE.

Yoel “Soldier of God” Romero is a former UFC Middleweight Title Challenger and a current Bellator #4 ranked Light Heavyweight. The Cuban fighter is known for his exceptional wrestling, and his silver medal at the 2000 Olympics in Sydney proves just that. He started his MMA career pretty late but was a top-ranked UFC Middleweight for a long time.

Romero had an attempt at UFC Middleweight gold against Adesanya in 2020 but lost in an uneventful fight by UD. After that loss, Yoel Romero transitioned to Bellator where he currently holds a 2-1 record, with his most recent win being over Melvin Manhoef.

A Japanese-Croatian MMA fighter, submission grappler, kickboxer, and judoka, Ishii is a 6th dan black belt in Judo and a Judo Olympic gold medal winner in the +100kg category in the 2008 Olympics.

Satoshi Ishii holds an MMA record of 25-12 and has competed in Bellator, PFL, and Rizin. He is still active in MMA and currently fights in the Fight Nation Championship (FNC), where he has a win over Charlie Milner.

Kayla Harrison is one of the most accomplished fighters on this list, as she holds a 6th dan black belt in judo, has won a 2010 World Championship in judo, and has not one, but two Olympic gold medals!

Harrison won her medals at the 2012 and 2016 Olympic Games in the -78kg category and transitioned to MMA in 2018. She is currently fighting in PFL Women’s Lightweight division and holds an MMA record of 15-0.

A silver medalist in Greco-Roman wrestling at the 2000 Sydney Olympics and a former NCAA Division 1 wrestler, Lindland’s highest MMA accomplishment was when he fought for the UFC Middleweight Championship at UFC 37 in 2002, where he lost to Murilo Bustamante.

He also competed in Strikeforce, Cage Rage, and IFL and had a match against one of the top MMA Heavyweights of all time, Fedor Emelianenko at BodogFIGHT in 2007, where he lost via an armbar.

Madsen is another Olympic Silver Medalist in Greco-Roman wrestling and a five-time World Champion. “The Olympian”, as he is nicknamed, has an MMA record of 12-0, and is currently fighting in the MMA’s top promotion, the UFC.

Mark Madsen has four wins in the UFC’s lightweight division, coming over Pichel, Guida, Hubbard, and Belluardo. He is scheduled to fight Drakkar Klose, at UFC Fight Night 213 in the Apex Center, Las Vegas, Nevada.